The New York Times Reviews Sandler’s ‘Goodbye To Tenth Street’ as one of the Best Art Books In 2018! 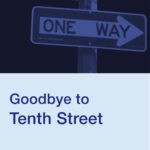 The Times’s art critics select some of their favorite art books and books related to art of the year.

‘GOODBYE TO TENTH STREET: A NOVEL’ By Irving Sandler (Pleasure Boat Studio). Anyone drawn to postwar New York’s art scene that centered in part on East 10th Street should read the last book of Mr. Sandler, the art historian and critic extraordinaire who died in June. He was there in the late 1950s and early ’60s taking notes while the Abstract Expressionists made history, and he became known for his meticulous accounts of their saga. But here he offers a roman à clef filled with the unverified gossip, overheard conversations, and rumors of nooners and backbiting that were unsuitable to fact-based history (though a few historical figures occupy the margins). The tale — from charged studio visits to nasty exchanges at the Cedar Bar —has its own sad, sordid, unsurprising truth.

And this month, Small Press Distribution included
Goodbye to Tenth Street in their SPD Recommends.